I recently attended a presentation sponsored by the Giving USA FOUNDATION entitled “The  Annual Report on Philanthropy for the year 2015”.

I am including a graphic that presents many other interesting facts about our giving in the year 2015. The graphic was created by the Giving USA Foundation. 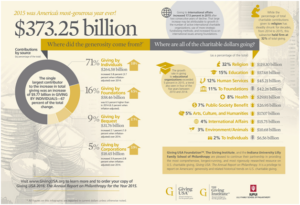 Now with individuals being the greatest source of contributions it is extremely important we discover the most effective way to involve the next generation of donors, the Millennials. During this same presentation we heard from a panel of experts involved with philanthropic organizations. One of the subjects they discussed and I felt important to share with you is how to encourage and motivate Millennials to participate in the many aspects of fundraising for your charitable organization.The panel pointed out that Millennials don’t give to organizations, they support causes and because Millennials are so connected through Facebook, Twitter, YouTube and other social media, they have the ability to influence so many of their friends for your cause.  In order to take advantage of this fact it’s important you use social media not to sell your organization but to tell the world about your cause by sharing stories and pictures and featuring people who have benefited from your service. If the millennial is moved by your message and connects to your cause they will become an influential voice to all their friends and family via social media.
Blackbaud also reported in their Generational Giving Report that 50% of Millennials share information about charities they support with their friends on Facebook.

It was also pointed out that with the millennium’s being 18 to 32 years old, the best way to excite them about your cause is to encourage them to volunteer. In the beginning volunteering their time and energy is the path to Millennials becoming your loyal donors.
With the Millennials being the largest generation since Baby Boomers we can certainly see the importance of connecting your cause to this generation.
Written by Connie Waddell, BAS of Elite Auctions and Fundraising Services